There have been some magical moments. Things and places that shake my faith in a rational universe. 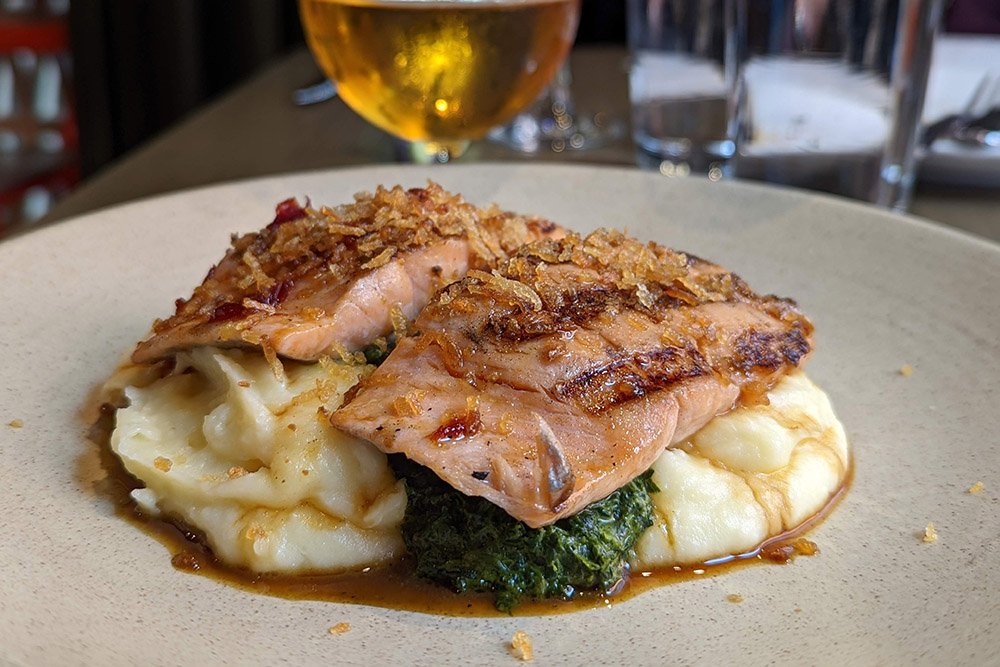 There was the bolt from God in the Mojave desert that changed me and us and everything in my life. There was the time travel incident with the stones. There was the werewolf we encountered in Ireland. There was the visit to the dragon.... somewhere..... near a sea of death, which has now vanished. There was the living mists in Oregon, so beautiful, yet somehow so dangerous we literally had armed men watching over us. None of it real. But all of it real. Stories to tell around the fire. Memories that can never be captured in photos.

Somewhere, in the far North, there was such a place. And we went there. And it was magical. And we will miss it to our last days, and beyond. We will remember it when we pass and pass into the next journey.

We argued for a long time about where to go. We needed food and drink. Perhaps..... not *needed*, but absolutely *wanted* in a determined and non-negotiable way. Surely there was a bar, a diner, a bistro in this vast plain that might have a table and a kitchen. Someplace open. Finally we found one.

In an old brick building, still standing among the shining towers of the new city. Named after the Irish goddess of fire, poetry and wisdom, the daughter of the god Dagda. It looked....... out of place. Out of time. Was it even open? The sign said "bar" but it looked more like..... a dry cleaners maybe? We hesitated outside the door. With the heat climbing we decided. And it was our only option, so in we went.

There were tables and chairs set out. A couple motorcycles against the walls. An unfinished ceiling held up by ancient black beams. Vaguely familiar music softly playing from somewhere. But no patrons. But oh yes... the smell of food. Delicious food if our noses could be trusted.

From somewhere a rail thin maitre d' appeared. "Can I help you?" they asked, perhaps confused, perhaps eager for a customer to finally wander in. We were seated at a table off in the corner, far from the entrance, next to a room filled with plants hanging from the ceiling. Much like the hanging plants in a different irrational adventure from a century long past. What have we gotten into? Perhaps we should have been worried. How had we even gotten here? We couldn't remember.

We were handed menus by another tall thin beautiful person. We were starting to feel...... let's say "under dressed". But the menus had what we wanted, surely, food and drink, simple as that. But..... again it was odd. Fish with radishes? Octopus salad? Some liver dish with hibiscus and rhubarb???? A drink named "dead frog"? Yes. Really. Yes. And though, yes, we looked, there was no unicorn, no candied butterfly wings, no literal Forbidden Fruit.

But among the fanciful and outrageous dishes was something even more odd, at least in context, "fish with potatoes and creamed kale". Just that. Just that normal. Of course, being Jon, I got the fish with creamed kale. Not because I have a love of creamed kale, but simply because surely no one has ever ordered it, with all these other mythical options crowding it out. So, fuck it, myths can wait, of course Jon will order it.

When it came I tried it tentatively. We all tried it. Each of us in turn. And each of us moaned at it's magic, nearly collapsing. Because it was magic. The potatoes were the potatoes you would serve the Gods, the creamed kale was the best vegetable any of us had ever eaten. The fish was cooked to a perfection that was...... hard to understand. And there was, for no reason I can fathom, a BBQ sauce which had flavors none of us could translate into words. We all agreed we must replicate it at home, but..... pfft, good luck figuring out that magician's trick.

There was a bar in an old brick building, in a new shining city, surrounded by a vast green plain, where you would be if you followed the North Star. And it was what we'd always searched for. And now that we've traveled from the far North, back home, it's what we will always remember, around the fire when stories are told.