The 4th day of the Ireland trip was a bit rushed. I had plans to get up early and race around Cork getting several bucket list photos. But we also had to be at the cottage by the beach at 3pm to meet the landlord and get keys. With roads as slow as they are in the SW I let fear get the better of me and cut out a few things as we left the hotel. Cohb and St Finbarr's were out. Darn.

So we headed to Gougane Bara, my Jethro Tull playlist on the stereo. There was one stone circle on my map which was on the way so we decided to check that out. We had a name and a dot on the GPS map, but I hadn't done any research on it. As we got to the road we needed to turn off on things started to look dubious. The road was unmarked and calling it a road was generous. It appeared to have been a road once, but hadn't seen much use recently and was rather overgrown. I was worried about scratching the hell out of the rental car. 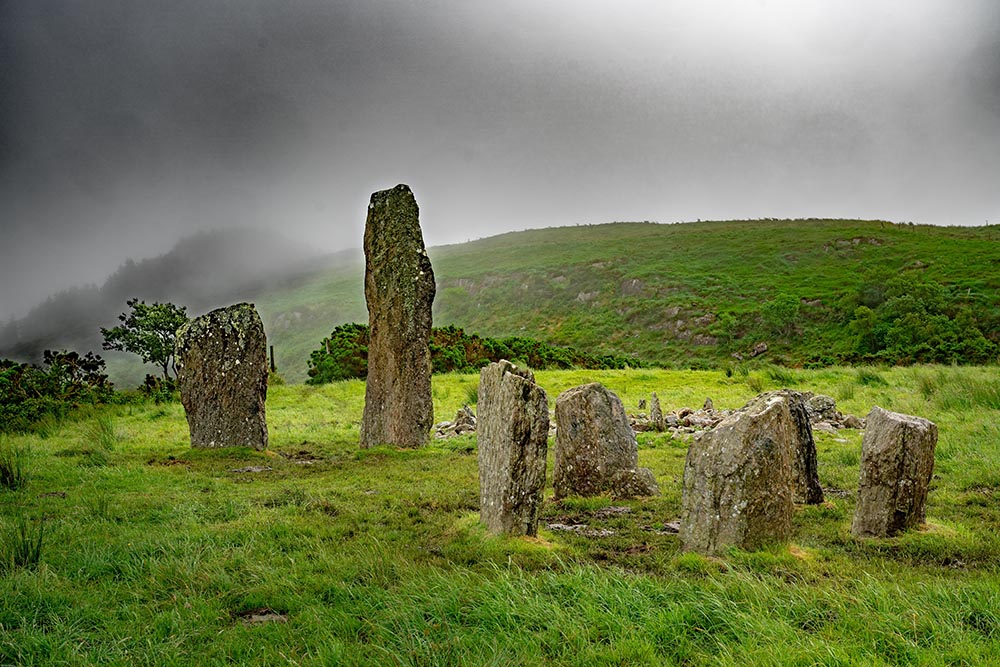 But we'd already skipped a bunch of stuff, so I decided to try it. I think Marilee suggested not to. I didn't listen.

As we got closer to the dot on the GPS the sides closed in more and the old road turned in to parallel sheep trails. We kept creeping along, looking for the trail to the stone circle. There was no trail. Everything that wasn't the path we were driving on was thick brush and thorns. We passed the dot on the map, saw nothing, backed up, still nothing. Wandering into the brambles for a stone circle we'd likely never find was not an option. I've done that. Bad idea.

So.... Now what? We're on the side of a hill. There's no place to turn around. Do we try to back up for a mile and somehow not get stuck? Do we keep going forward and hope the path widens? With a muddy ditch on one side and a nasty drop off on the other, backing up wasn't going to happen. So we go forward and hope.

As we come around a corner a large herd of sheep is filling the path, slowly walking in the same direction we are. As I get almost close enough to nudge them, none of them speed up at all, and none of them get out of the way. Just lazy sheep, eating and pooping, slowly going somewhere in no hurry. I considered just pushing through them. Marilee vetoed that. So hurrying to the cottage had turned into driving 1 mph and lost. With no other option short of getting out and pitching sheep over the side, we creep forward behind them.

Eventually we come to a turn off which the sheep headed down. Finally. I go to make a three point turn and head back. As I turn in where the sheep went we see them all charging straight back at us, fast. They looked scared. They are clearly fleeing something. Even with no room on either side, they ran into the ditches to get around us, not even slowing down, and kept running up the road. We look down the way they came from and see a huge overgrown metal gate with a stone arch, like you might have for an old timey mansion. It clearly hadn't been used in decades. It looked right out of a Lon Chaney Jr. movie. 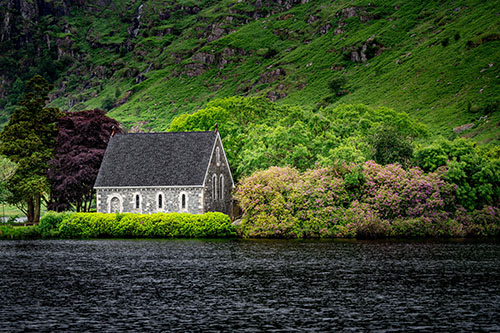 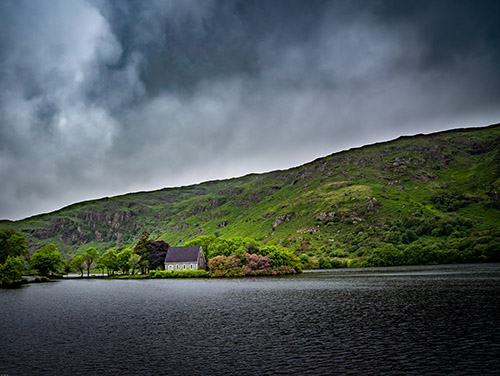 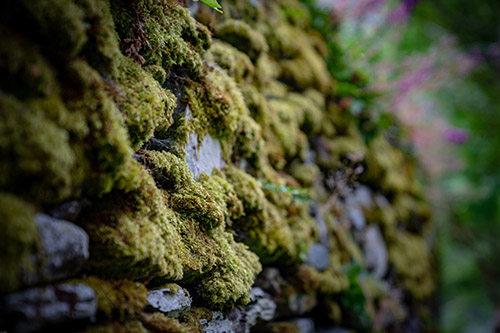 We have no idea what the sheep saw. We didn't actually observe a werewolf. But it's pretty obvious that's what it was. I grew up with sheep, and they don't freak out like that over dogs. People obviously didn't spook them. It had to be something monstrous. We didn't wait around. I turned the car around and we got the hell out of there.

Here's the weird part....... I still have the maps we used on the trip. The dot for the stone circle isn't on any of them. Obviously I'd love to tell you where the gate is, but I have no idea. All the other dots and directions are there, but not that one stone circle. I even saved a backup of the map only I have access to. No dot.

Somewhere Between Cork and Gougane Bara there is a crumbling ancient mansion with a werewolf in it. And it's tech savvy enough to hack my Google account and cover it's tracks. 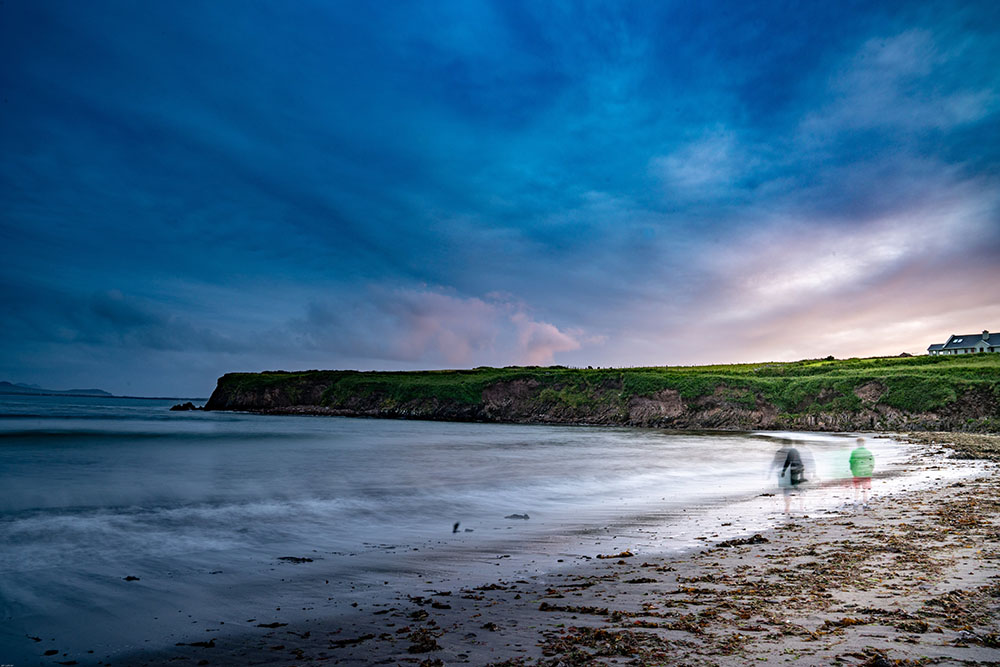 For the Ireland trip I spent months putting together detailed maps and notes so that we could pack the most stuff into our two weeks there. But even so we ended up stumbling on some awesome stuff I didn't know about. For example Carriganass Castle is apparently one of the ancestral castles of the O'Sullivan clan, but I didn't even have it on my map. We were just driving along, soon after the werewolf incident, when we see a nice castle right by the road. We hop out to take a look and find this huge plaque about the O'Sullivan Beare family history there.

This is one of the things that makes Ireland so magical. All of these truly incredible things are just sitting along the road, pretty much everywhere. In fact we also found this fantastic stone circle right by the castle that I also hadn't heard of before. This stone circle, sitting in the foggy hills, overlooking our ancestral castle was one of my favorite stops on the trip.

And it turns out there's another one close by that we missed altogether. Every day was a new adventure. Magical.

Then on to Gougane Bara and Killarney National Park. Yadda yadda.

We made it to the cottage by the beach in plenty of time. Headed into Dingle. Had some pints and listened to a fantastic musician playing the uilleann pipes. What a day.