Not going to do the family Thanksgiving in Montana this year. Actually.... Not doing it at all this year. 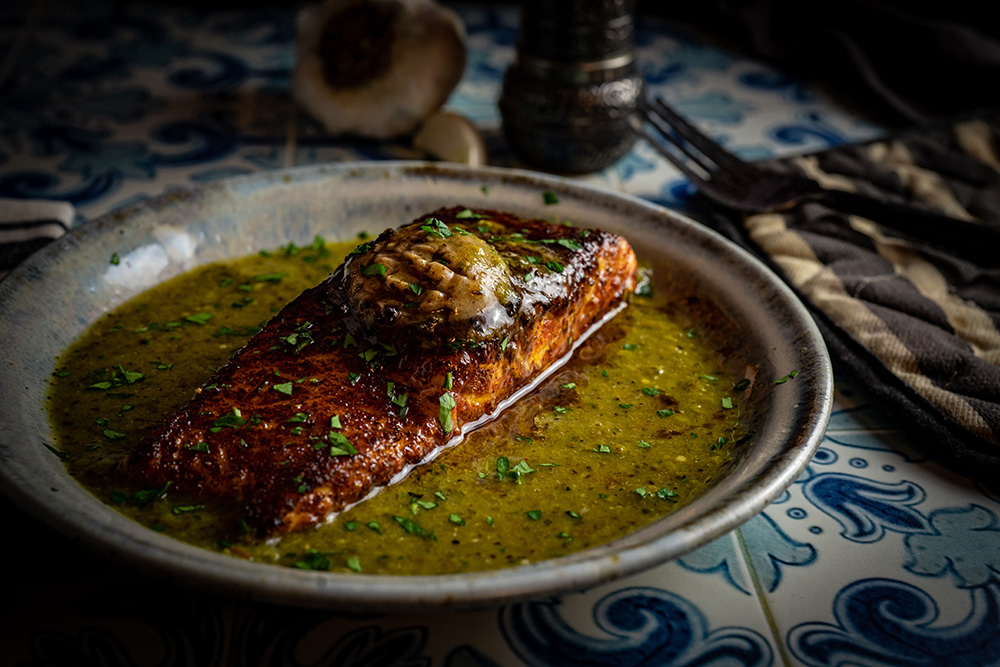 Long story short - The WoW expansion release is Thanksgiving week this year. And while the Thanksgiving cooking fest has been a core part of my life for the last 22 years, the WoW expansion is not something I can miss. So 24/7 video games rather than 20 hours cooking. I went all in on my vacation time and will be bunkered down and unreachable outside of game for 2-3 weeks.

But........ Just abandoning the yearly cooking challenge to play video games will be lame. So I'm going to try to spend the next week cooking the stuff I would have cooked had it been a typical year. Like one a day or something. I made the dish shown here a couple days ago. Blackened salmon with salsa verde and black garlic butter. Also made a smoked salmon mac & cheese. And some Irish cheddar potatoes au gratin with bacon and mushrooms. Tonight may be (depending on motivation) Nashville hot chicken wings with cranberry BBQ sauce. Tomorrow looks like chopped beef sliders with blue cheese and peach chutney. Thinking about an Instagram sort of prawn salad with green goddess dressing, heirloom tomatoes and charred sweet onions. You get the idea.

It all goes back to the crazy summer of '94 in Missoula Montana. Among all the other shit going on during that period, I finally decided at the age of 31 that I needed to grow up and work out how I should live my life. Like.... goals and crap.... meaning..... purpose..... a plan. In the end I worked out that the minimum I needed to be happy and consider my life successful was 1) a job in programming, and 2) playing video games every chance I had. Nearly 30 years later and it turns out that stupid conclusion was 100% correct.

Thus, when it comes down to either Warcraft or Thanksgiving, I don't need to think long and hard. The math was already set in stone back in '94. Some traditions will stay though. I'll be playing with a plate of brie and pate at hand, and a glass of champagne. See you in-game.

2020-11-16 14:08:37 : Sorry Bud, I was looking forward to seeing everyone again as well... for awhile I was for being a bit reckless and getting g together anyways sine our lock down seems endless... except... I now am a reason why you dont want to travel and gather in groups... Yep, I got sick last week and tested positive last Tuesday. Sucks, but all in all, I could be worse.

2020-11-16 14:40:51 : Iris is quarantined in the basement, me on the main floor. She is not feeling well but too early to tell. We are waiting for the Health Dept to schedule her test. It took them nearly a week after my test to contact me for contact tracing. They are getting very overwhelmed by the amount of people testing positive lately. So far, I had intestinal flu like symptoms with a cold thrown in for good measure. For several days I was wondering if I had a false positive result and then... I lost my ability to smell. So.... pretty sure it is covid. We are all set for now and as long as it doesnt go to the lungs I feel fortunate.

2020-11-21 20:00:35 : Just letting you all know that I have been cleared of quarantine ny the health dept. I feel a lot better but still can't smell anything yet. This may open up more job opportunities with sewage plants and garbage pickups. Iris tested but still doesn't have her results back. Just an FYI for everyone

- 2020, the photos
Not many photos this year. But at least I got a few I really like.
- 2020, a year to be thankful
At least for me. Which might be selfish. But beyond the tears, 2020 treated me quite well.
- 2020, a bad year
My depressing take on our invasive mammalian species as we complete the latest circuit around the sun.
- Down in the Hobbit hole
Shelter in place gourmet, lizard curry edition.
- Next Thanksgiving dish
Prawn salad with charred sweet onions, garlic croutons, and green goddess dressing.
- The Thanksgiving problem
Not going to do the family Thanksgiving in Montana this year. Actually.... Not doing it at all this year.
- The Warcraft problem
Things are about to get very frantic. Not Trump related, shockingly.....