The main reason I moved to Oregon was, sort of, a photo I saw years ago. I needed to take that photo. 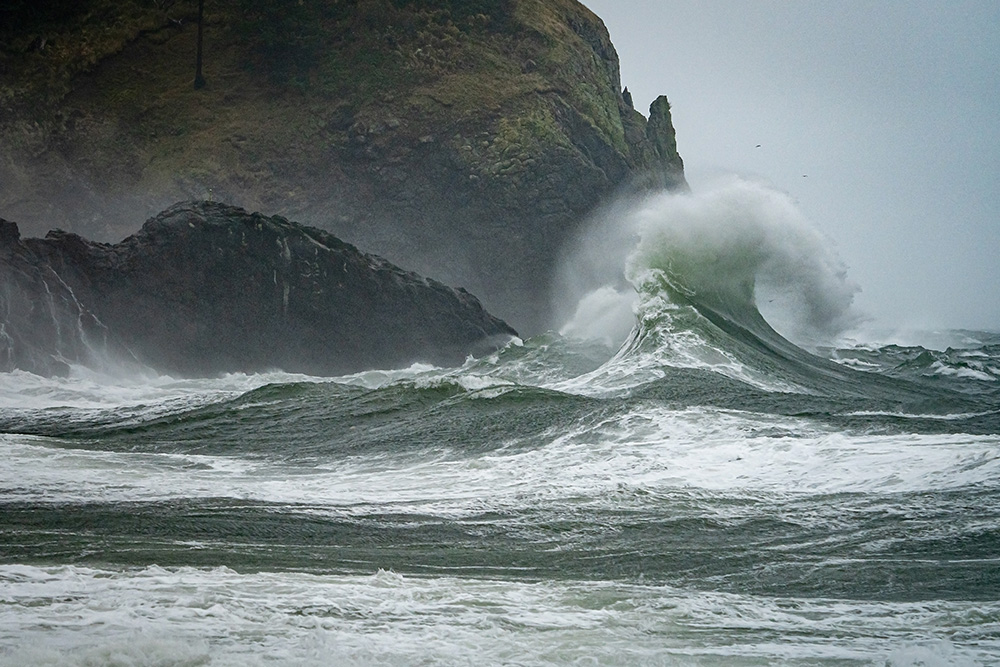 More than anything else my photography hobby is inspired by the work of Nick Page. And one of his photos was a huge reason I moved here. That would be this photo. It's a photo I've had stuck in my brain for years. And since I got here I've been watching the weather and tides to try and take my own version of it. I've known for years exactly where he stood when taking it, exactly what conditions made it happen, and I've been preparing to get my own version even before I decided to move here. I won't ever stop taking photos of it until it becomes completely impractical or impossible. It is my holy grail.

For whatever reason it all lined up on Christmas eve. King tides on a day off, a holiday to thin out the crowd, and all my gear finally in place. It's a four hour drive there. High tide was at 1pm. I knew there'd be a ton of other photographers showing up fighting for space, so getting there early was critical. I hit the road at 4am, as I do. But there was a problem. The winter storm that had killed lots of people and brought temps down to 50 below had been the night before. The entire route I needed to take had been, and perhaps still was, covered in black ice. I had no idea what frozen hell I was driving into.

It turned out the roads weren't too bad. But there were lots of cars and semis still off the road from the previous night. And when I got off the freeway in Portland the roads were still icy. Thankfully the new car is an unstoppable beast. The studded snow tires were a huge expense but it's paying off. Streets I could barely walk on were no problem to drive on. The tires would break loose if I tried something crazy, but overall it's handling winter better than I even hoped. That is very happy making. Adventures needn't care about the weather.

I scouted out a few locations in Vancouver along the river, but didn't get any good shots. I did find out I'll need to buy spiked feet for my tripod. With ice covering everything it was being blown across the ground by even a slight breeze.

Then on to the cove where the waves are - Disappointment Cove in Washington, along the Columbia river. The Astoria Bridge was apparently closed due to ice, so I had to go the longer way around. It was a pretty long way to drive just to get one wave photo. I had that weird moment where you pull up to the gas pump, wait for the attendant to come out and pump it, then realize you're not in Oregon and they make you pump it yourself. How inconvenient.

When I arrived the weather was quite bad. High wind and raining. Dark skies. Sea spray being blown all over where I'd be standing. Not great for photos at all. The wave would need high speed shutter, but the dark skies would mean the ISO would have to be cranked up. And since the wave would be 200 yards away, through fog and rain, there would be no way to avoid grainy photos. De-noise tools only go so far. Didn't matter. I could see the wave I'd waited years for forming. And finally being there seeing it with my own eyes, knowing I was about to capture it, was incredible. I cried. A lot.

With high tide about an hour away I waited in my car along with about 20 other people who didn't want to be the first to stand out in that rain. Then one group set up and everyone jumped out and got in place. It was shoulder to shoulder. I'm sure in better weather you'd have heard shutters constantly clicking, but between the wind and the pounding waves you couldn't hear anything. And we all went at it. Waiting to get just the right shot, but taking hundreds of photos each to make sure we didn't miss it. I ended up taking nearly 350.

I got it. Finally. Years of seeing it in my mind. Now finally in my camera. Even with the long icy drive, the pounding wind and rain, it was one of the most wonderful days of my life.