On balance, my many years on this blue dot circling the sun lead me to the conclusion I'm better off alone. But at what cost? 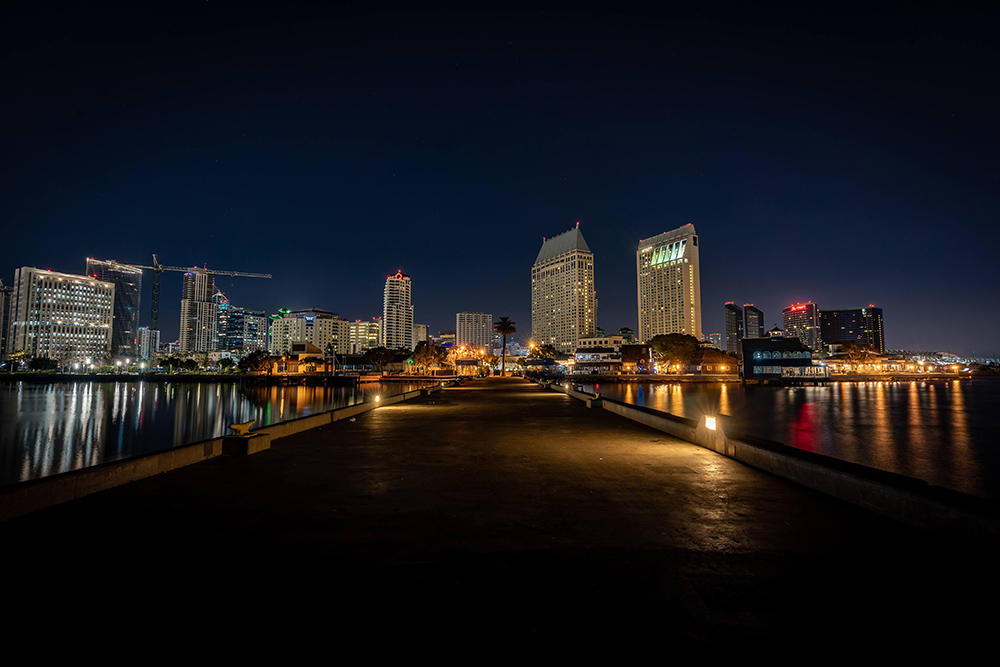 If you click on the photo in this post a couple times you'll get to the Google photos version you can zoom in on. But even zoomed in you can't really make out the dozen or so people I walked past that morning who were sleeping on the sidewalk along the bay. It was a very cold morning. As Americans, how often do we stop to notice, not the homeless, but deeper, how much suffering we let people endure? In poorer countries there might be a social safety net. In an America that prioritized (rather than demonized) virtue and grace the homeless would be rare, rather than common.

I don't judge. I know that I could be there. Much of my life I lived paycheck to paycheck. For decades debt was a trap I couldn't get out of. I'm in good shape now. But it could easily have gone bad. Many divorces, bad career choices, and financial stupidity all had me close to the edge more than once.

I love this photo for it's melding of the symbolic and the literal. It's a bare concrete pier leading to a city of light and wealth. It's also a photo of the homeless, who you don't even see. By day the fishing boats pull up and sell live sea urchins and crab and lobster to the lucky. At night the unlucky use it as a bedroom that only faintly smells of fish guts.

I remember reading a news story several weeks ago about a man who lived alone. Like me he avoided being around people. Even friends and family rarely saw him. So as he went slowly insane and eventually started stabbing people, no one noticed until it was too late. Maybe they should have noticed, but how would they? Like me his only social presence was online. I don't feel crazy. I can't imagine ever stabbing anyone. But he likely felt the same way.

It's clear to me that I'm better off alone. You can only fail at relationships so many times before you must admit..... it's you. Blaming the others is easy. But come on..... it's you.

Maybe the symbology in this photo is more related to my own self imposed exile. Forever apart from the beautiful people and their wonderful relationships. But not just apart. Separated by a bay. Beyond even the homeless.

I choose to be alone. And I'm honestly happy alone. But at what cost?